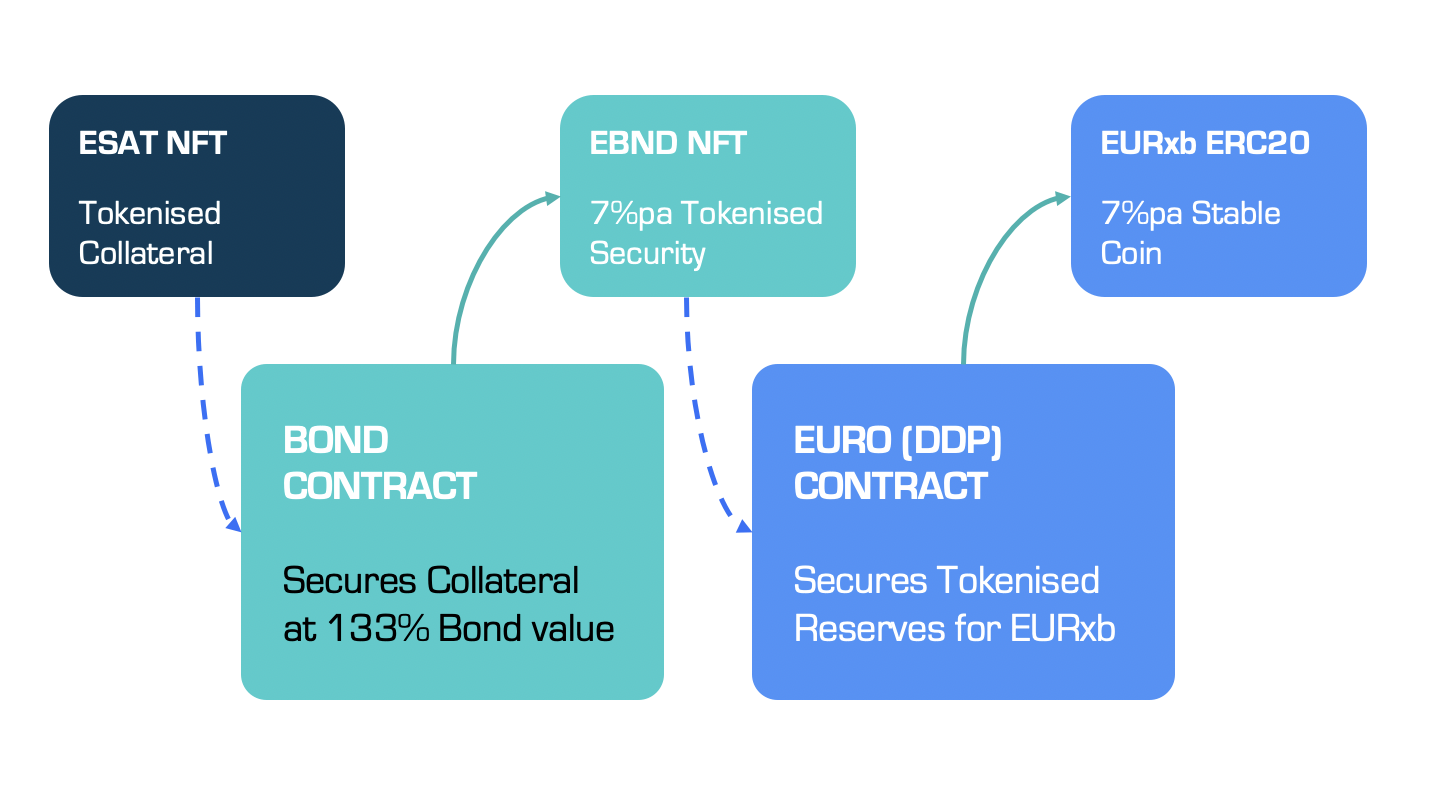 How does the EURxb ensure tokenholders' rights and the protocol reserves are secured in a regulatory compliant way? Find out here!

With the advent of the Internet in the early 90s, corporations initially had no interest in connecting their company networks to the Internet or in giving each person in the company a universally accessible email address. Corporate networks and the Internet existed separately for many years. Today we are facing the same adoption challenges with traditional financial institutions and their legacy structures in relation to DeFi. For the most part these two worlds exist separately.

EURxb is the result of a strong launch partnership with Miris which has for many years been sourcing finance for large capital projects through conventional bond issuance and equity raises, whilst experiencing the frustration associated with the lack of economically feasible secondary markets for these types of bonds, due to the associated high costs of selling and buying them.

As a team with deep traditional financial institution experience, and many years’ experience with disruptive innovation in this sector, we realised that in order to attract more liquidity and activity from institutions to DeFi, we needed to create bridges between these worlds which meet the requirements on both sides. High levels of transparency and community participation is needed to succeed on the DeFi side, and high levels of certification, governance and accountability on the institutional capital side.

Our work with EURxb is focused on achieving compliance in both worlds, and if history repeats itself, achieving this would usher in the same ubiquitous adoption and scale for DeFi as when Corporate networks bridged their internal networks to the Internet.

Many jurisdictions are contemplating new legislation that makes explicit provision for blockchain native, or tokenised assets, and their use in financial services. Notably, Switzerland has already enacted “Blockchain Laws”, while other territories, including the EU, have issued detailed consultation papers on the topic. The alternative, and the necessary default, is to work within existing legislation. This can be difficult, and therefore many regulators have issued guidance notes relating to assets enabled by blockchain technology. For those innovating in this space, legislation is obviously unavoidable, but also represents a robust framework that is well understood, and within which a solid framework of practice has been established.

The EURxb team awaits blockchain specific regulation with great anticipation, but we also recognise that innovating within the current framework is an essential and unavoidable part of the adoption process. We are also of the view that current practice provides a strong foundation on which we can build, and we believe that we have found ways to create new value and utility, while retaining all of the risk management and legal aspects of the current model.

The EURxb is a stablecoin derived in the first instance from a bond issued by Miris AS, a Norwegian property business. The issue of the bond is a conventional process, on which the EURxb protocol builds. In the process we deal with the three broad stages in the bond’s lifecycle. These stages are bond issuance, trading, and maturity. The protocol is designed with the intention of providing liquidity to other instruments across many jurisdictions by using them as collateral for EURxb, but the scope of this document is restricted to the initial case of the bonds issued on behalf of Miris.

The issue of the bond follows a conventional process before interfacing with the EURxb protocol. The link is in the bond documentation, which contains clauses that enable the tokenisation process. Trading on the CSD is limited, because the bond is locked to enable liquidity in the stablecoin. The maturity process requires an unwinding of the creation process, with some elements that are specific to each issue. These three stages are described in more detail below.

The conventional bond process goes from the allocation and review of assets by the bond issuer, through collateralisation, to the issue of a bond:

b. Legal Documentation and Link to Bond

The associated tokenisation process overlaps with the traditional one:

●     Non fungible tokens are minted representing the assets in step 3: the ESAT tokens;

●     These asset NFTs are locked in a smart contract, and EBND bond tokens are issued at the overcollateralisation ratio of 4:3 so the encumbered assets mirror the conventional bond.

The ESAT asset tokens are non-fungible (ERC721 NFTs) and reproduce exactly the details of the assets as validated and documented by Nordic Trustee. The EBND bond tokens (also ERC721 NFTs) are each linked to a single specific ESAT token and contain exactly the same information as the bond documentation logged with Euronext VPS. The tokenholder may thus be reassured that the token held represents a bond that has been issued in full compliance with Norwegian regulations and processes. The full bond documentation, details of Miris, letters from Nordic Trustee and all other documentation may be viewed on the EURxb protocol’s site here: https://eurxb.finance/partners, and the Issuer (Miris) site here: https://www.no0010912843.no/

The link between the traditional and the tokenised market is the assignment of the bonds, via an agreement signed by the issuer, to the tokenised secondary market through the EURxb.finance protocol. The bondholders bind themselves to settle any obligations incurred in the secondary market via a clause in the bond terms:

“By participating in the secondary liquidity market, the bond holder instructs the Issuer to settle any tokenised liabilities incurred by or on behalf of the bondholder at maturity of the bond from the principal and if required also the interest payment due.” -Clause 2.1(f)

The EURxb protocol insists on Senior Secured Bonds that have the primary claim to such assets and over and above the independent agent’s verification thereof require the issuer to list them in a specific public pledge. Thus, EBND and in turn EURxb tokenholders can have clarity and certainty on the value the issuer is placing at risk in case of default at maturity.

The full token issue process follows from the issue of the ESAT asset tokens against the encumbered assets. Once issued, the ESAT tokens are locked in the EURxb’s Bond Smart Contract, which then creates a unique linked EBND ERC721 NFT token for each ESAT token deposited. The value of the EBND tokens is a fraction (three quarters) of the ESAT tokens in accordance with the overcollateralisation ratio (4:3) applied to the assets that secure the bond. The ESAT token cannot be released from the contract unless its specific linked EBND token is returned to the contract, as the EBND token represents a copy of the claim that a bond subscription has on the assets.

The created EBND tokens are then deposited (automatically by the EURxb’s Bond Smart Contract) in the EURxb’s Euro Delegated Debt Position smart contract. This locks the EBND ERC721 NFT as the protocol’s reserves, and then creates EURxb stablecoins from it. These EURxb ERC20 tokens are fungible, with a value of €1 each.

This completes a chain of assurance from the conventional bond issue enacted through the usual regulated entities, via the bond documentation, to the tokenised secondary market.

The owner of the bond subscription remains the bondholder as recorded in the CSD. However, the bondholder has now opened an account with the EURxb protocol in which it can incur liabilities against these bonds while they are held in reserve.  Depending on the intended use, the EURxb tokens created are deposited into the bondholder’s authorised wallet address, or alternatively to an institutional Vault address where their value will be deployed in respective DeFi projects to earn further returns.

In order to withdraw their EBND tokens from the EURxb Smart Contract, the bondholder must settle the full liability incurred to the protocol by repaying the full value of each EBND in EURxb tokens they wish to withdraw, via the EURxb Euro Smart Contract.

In the case of Miris’s Senior Secured Green Bond, the original bond is not tradable from bondholder to bondholder through the licensed exchange (Euronext VPS), since it is not listed for trading because the assignment document prohibits the issuer from doing so. The bond can only be bought back by Miris from a bondholder, and again resold to another (or the same) bondholder by Miris – making Miris as the issuer the only agent for conventional secondary market trade. The EURxb token is established as the exclusive mechanism for tokenised secondary market trade through an explicit assignment by the issuer, as noted above.

Bondholders will be the beneficial owners of the EURxb associated with their bond, but, in this first issue of EURxb, will not be provided the option to have EURxb transferred to their authorised wallet address, unless they transfer their bonds to be held in custody by Miris.  This is achieved through a Miris custodian account at Euronext VPS, the CSD, that empowers Miris to hold securities on behalf of an identified third party and requires the consent of the bondholder to transfer their security to such an account after issue.  By default, any bonds held directly by a bondholder that are deployed in the tokenised secondary market will see the associated EURxb paid into an institutional Vault where the bondholder is unable to access the tokens directly.  Only once the bond is in this Miris custodian account, will EURxb be paid to the bondholder’s authorised wallet address. At this point, the bondholder can make full use of the EURxb tokens.

In the event that a bondholder wishes to dispose of a part or all of their bond position through the tokenised secondary market, they can trigger the process by repaying a quantum of EURxb stablecoins (equivalent to the value of one EBND NFT) to the EURxb Euro Smart Contract from their protocol authorised wallet address. Only deposits of EURxb from authorised addresses will be attributed to respective bondholders’ accounts. This process will release the EBND token to a protocol wallet specifically used for the purposes of holding it while Miris (as the issuer) effects a transfer of bond ownership on the CSD.

On maturity of the bond, the EBDN bond tokens may be claimed and redeemed for the appropriate sum attached to the claim that they represent. The bond tokens are obtained through the mechanism described above and may only be issued - because they track the record of ownership on the CSD - to a party whose identity has been verified in accordance with normal regulatory practice.

This process must be followed before the maturity date, as at maturity the bond must be settled. EURxb tokens that are still in circulation at maturity will have their backing converted from bond reserves to bond maturity payment in stablecoins, and cease to attract interest at maturity date.

The ESAT security tokens linked to matured and unclaimed EBND bond tokens will be updated to reflect a claim on the maturity value in non-EURxb stablecoins and the wallet address on the blockchain containing the stablecoins for public verification, due to the holder of the EBND bond token.

This final payment reserve (aftermaturity) will be paid to a tokenholder once their EURxb tokens have been repaid to the EURxb Euro DDP Contract.

Thanks to Tobie van der Spuy for assisting on this post, and John Campbell for his ever insightful preface. 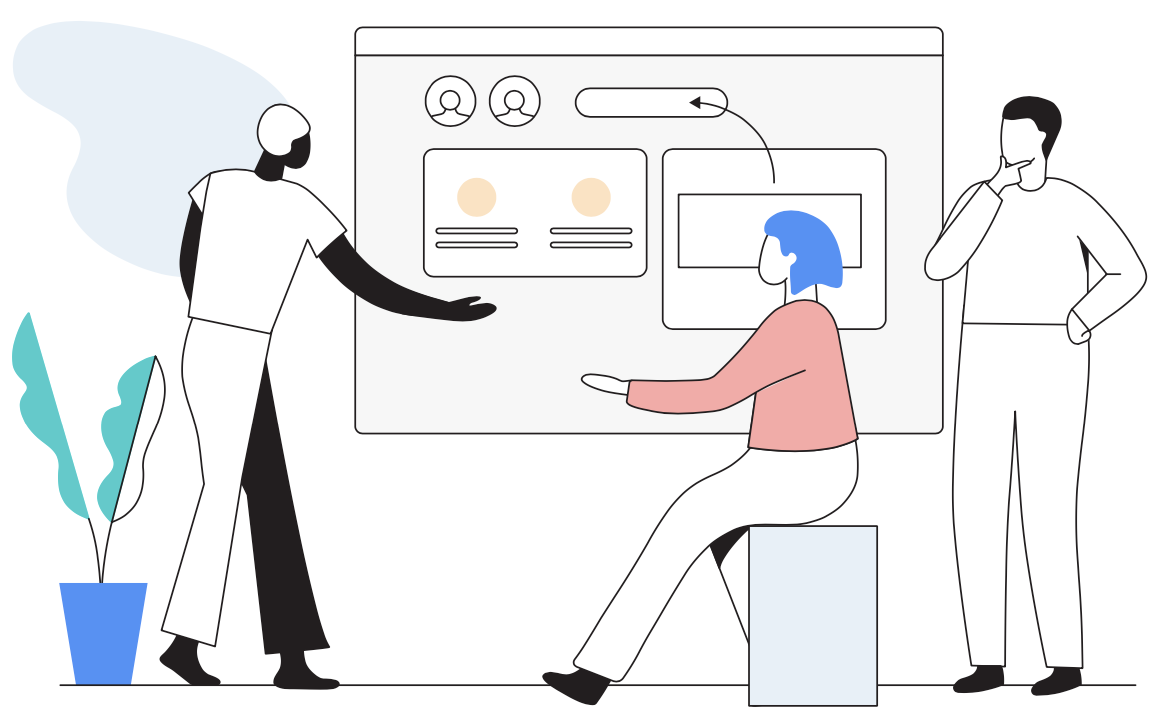 Two weeks have flown by since we announced the EURxb, and a lot has happened! Catch-up with us, and take a look at what is to come. 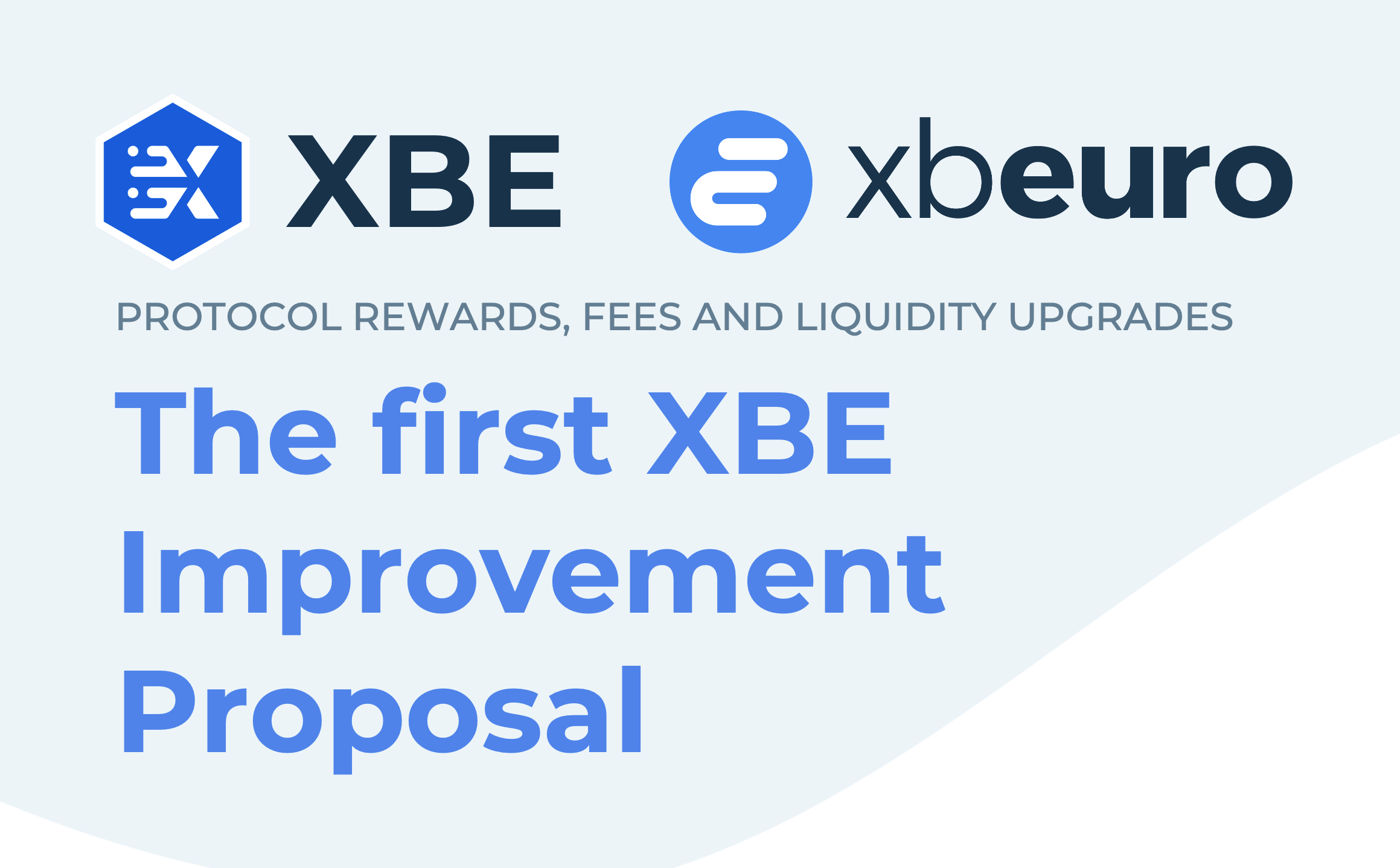 Time for an AMA on the first XBE Improvement Proposal - Protocol Rewards, Fees and Liquidity Upgrade

The first XBE protocol proposal is out! Join the discussion in our AMA on Tuesday 11 May 2021 at 14:00 UTC on our official telegram. 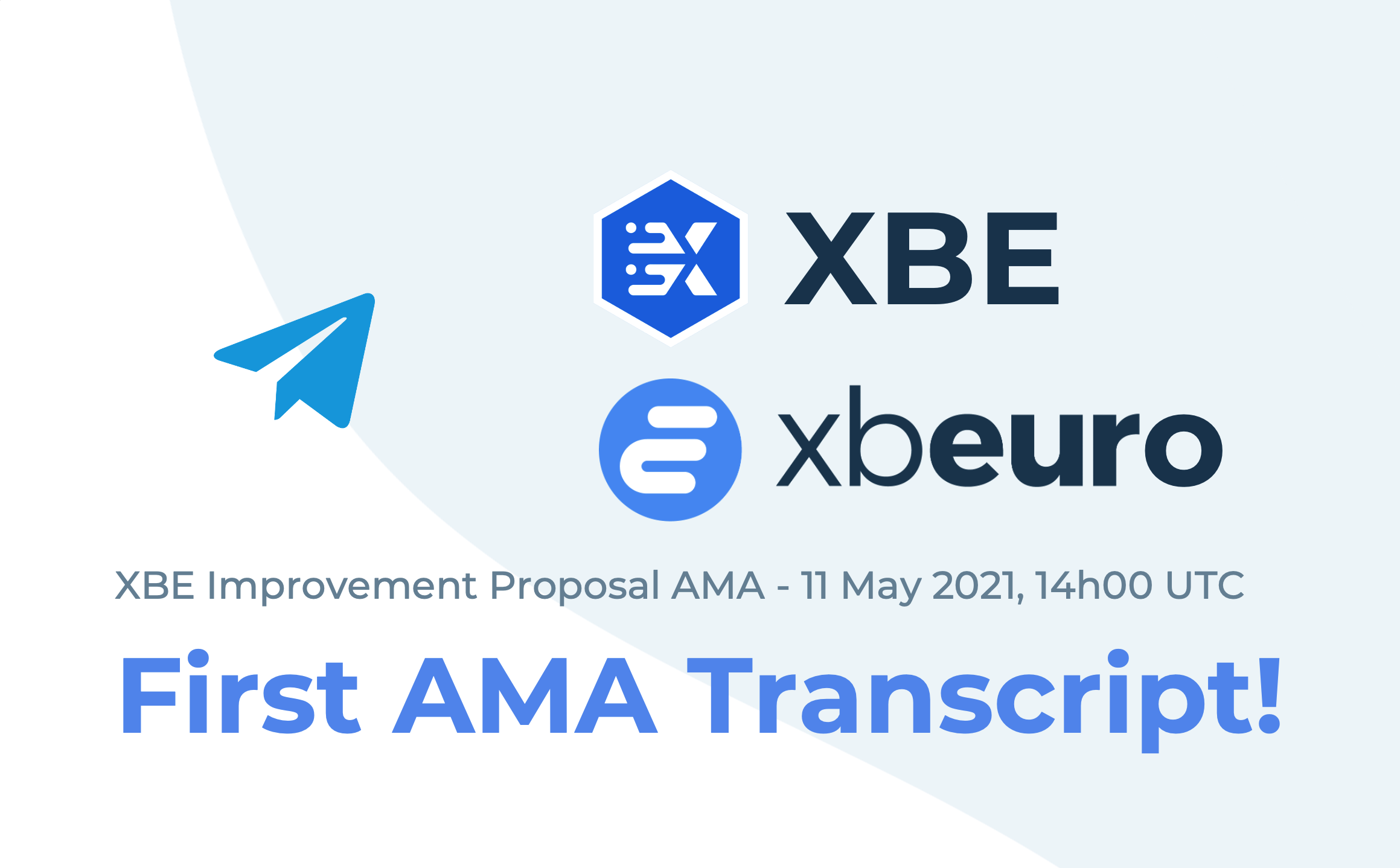 Thanks to the stimulating questions from everyone that made our first AMA on Tuesday 11 May 2021 a success! The chat transcript is here now!